I had a great time in Paterson, NJ with the Girls Fight Back program for a night aptly titled “Be Your Own Superwoman.”  I had such an amazing evening with these fantastic young women teaching them how to do the Terminator Tango.  (The youth version of the Badass Ballet!)  Special thanks to sponsors Silk City School Based Youth Services Program and the Family Empowerment Program for having me and also for going all out with Superwoman t-shirts and a Girls Fight Back cake!   It is such a privilege to share this message with young women who need to know as they leave their teen years that they ARE WORTH FIGHTING FOR! 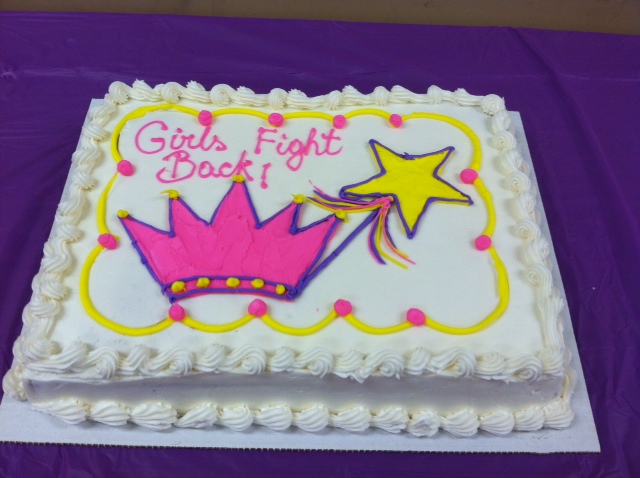 Just this past Tuesday, I did a Girls Fight Back program at Clemson University in South Carolina.  It was a Panhellenic program attended by hundreds of sorority women.  As a Tri-Sigma, I adore speaking to Greek audiences.  Yes, there is a lot of baggage that comes with going Greek and there are tons of stereotypes, but when you really think about it, sorority women have made the incredible choice to build up other women.  In our society, which thrives on tearing others down, these women come together to grow and learn as sisters.  Now is it perfect?  Of course not. There are always going to be certain schools or chapters who perpetuate the stereotypes and give all Greek organizations a bad rap, but the majority of sorority women I know and those I meet on the road with GFB, are a part of the system because they want to become better people and they want to help their sisters become the best they can be.  The women I spoke to and laughed with at Clemson truly exemplified what it means to be a sisterhood.  The room pulsed with girl power and I felt an instant bond with each of you.  Thanks for making my final program of the semester a truly memorable one! 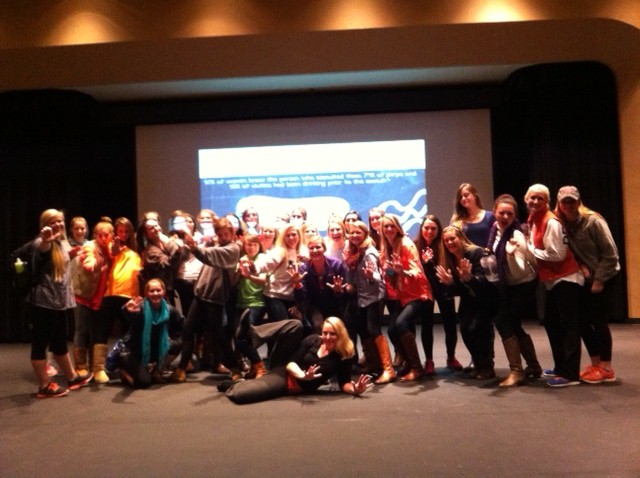 At Southern Methodist University, sexual assault and prevention efforts have generated many headlines. But the latest debate, which started in SMU’s student newspaper, has attracted national attention.

It all began last week with an opinion piece about alcohol and sexual assault in The Daily Campus, SMU’s student newspaper. In the guest column, SMU student Kirby Wiley says women should drink responsibly to avoid rape and asks “is the blame being placed in the right place?” by focusing only on the perpetrator.

“If the media would focus more attention on the fact that the majority of the women who are sexually assaulted are intoxicated, as opposed to stating and restating how horrible the perpetrator is, then maybe young women would start to listen,” she wrote in the piece, which was published Friday.

More than 300 people have signed a Change.org petition questioning the newspaper’s decision to run the piece and two others. The petition says the articles contribute to misogyny and victim-blaming.

“These types of articles are a slap in the face to young women on this campus who are survivors of rape, and publication of such articles discourage the reporting of sexual assaults,” the petition says.

The petition was started by two SMU student groups, Women’s Interest Network and SPECTRUM, an LGBT group, on Friday.

Samuel Partida, an SMU senior who helped create the petition, said he’s been “surprised and overwhelmed” by support for the petition and is encouraged by the conversation it started.

Take Back the Night, a rally to raise sexual assault awareness, and similar campus events at SMU usually draw few students and little attention, Partida said, but he’s hopeful that may change. “We are looking toward trying to create a sustained and perpetual dialogue,” he said.

In the controversy’s wake, The Daily Campus’ editorial board explained its opinion page policies and invited students to “join the conversation.”

Katy Roden, editor-in-chief of The Daily Campus, said the opinion page is intended to be “an open forum for students” and any student can submit a guest column.

Wiley, author of the controversial column, said she now wishes she’d worded her thoughts more carefully. She said she wrote it after seeing many students binge-drink and hearing about the gang-rape case at Vanderbilt University. “

All I wanted was to promote awareness of this issue because I want to help other women,” she said. “I would have definitely reworded things because I don’t believe in blaming the victim at all.” “Hopefully, it will raise awareness to some extent in a positive way,” she said.

On the tail end of our Be Your Own Badass Tour 2013, I met up with the gals of University of Wisconsin – Madison. They did not disappoint. With a stellar turnout, lots of energy and a veteran “Scary Bad Guy” (TJ was founder Erin Weed’s volunteer back in the day)… things got real. People were really getting into the Badass Ballet and we finished strong with an insightful Q&A discussion full of engaging questions about safety on the street. Needless to say, these fierce women are GIRLS FIGHT BACK.

Want to get in on the action? We are currently booking for our Spring 2014. Give us a yell.. we’d love to come see your beautiful faces! 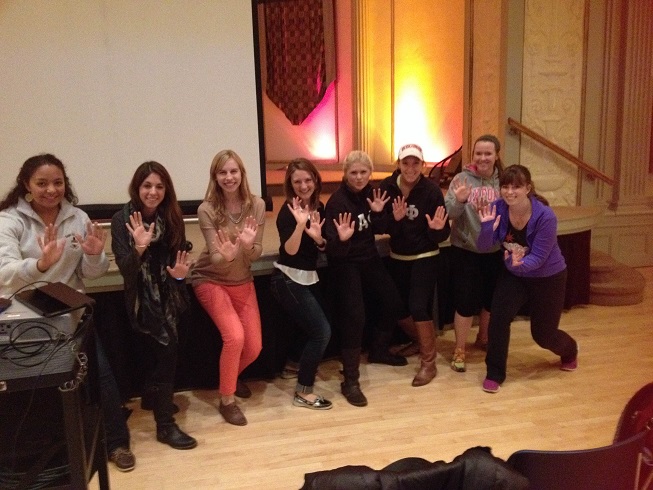