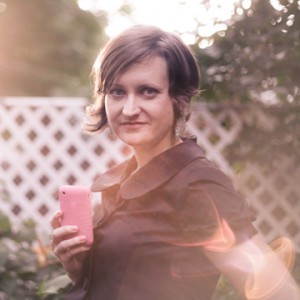 Emily May is the founder and Executive Director of Hollaback, a non-profit organization dedicated to ending street harassment around the world.

Hollaback! was founded because we were pissed off about our inability to fight back against street harassment.  When we walked on we felt weak, when we yelled at guys the situation escalated, and the police didn’t care.

We were haunted by the idea that this was the price we had to pay for living in a city, or being a girl, and we were tired of pretending that it didn’t hurt.  So we started Hollaback.

And after six months of snapping photos and blogging about our experiences, the funniest thing happened: we stopped getting harassed as much.  At first we thought it was a fluke. But then it just kept happening: holla’ing back resulted in less harassment.

How does this happen?  For me, it was psychological. Once I knew I had a badass response to street harassment, it didn’t scare me anymore. Whereas I used to walk down the street thinking, “please don’t say anything please don’t say anything” on repeat in my head, Hollaback changed my tune.  Instead of coming from a position of fear I started to walk down the street with my cell phone camera in hand thinking, “just try me.”  It was a framework shifting.

I’m not saying I don’t still get harassed, I do.  But knowing that you can fight back, and that’s it’s not your fault, is an awesome thing.  And this is what Girls Fight Back is all about.  It teaches us that we have a response.  That we don’t just have to be silent. That we can fight back.

On behalf of all of us at Hollaback!, I want to wish a very happy 10th birthday to Erin Weed and the Girls Fight Back team.  Here’s to another 10 years of kicking butt, and reminding all of us that we can too.

Note from Erin: How I love me some Emily May! We recently enjoyed dinner and wine at the cutest French cafe in New York City, and talked for hours about a world where women felt safe enough to walk down the street. To support Hollaback!, check out their new “I’ve got your back” campaign that is designed to engage bystanders in the fight against street harassment.  And if you’re able, please donate!

63 thoughts on “A badass response to street harassment”