So, Rihanna did an interview with Oprah and the world is all a buzz. 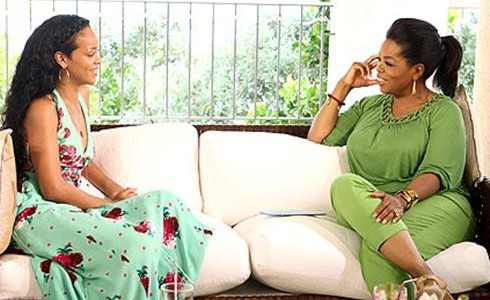 One of the chief topics of the interview was Chris Brown, their past (and current?) relationship, and the assault that left Rihanna bruised and bloodied in February 2009.  I’ve copied some of the most talked about quotes here for those of you who maybe have not seen the interview:

“I was hurt the most. Nobody felt what I felt…It happened. It happened to me…It was embarrassing. It was humiliating. It was hurtful. I lost my best friend…Everything I knew, was switched in a night”-Rihanna remembers the night Chris Brown attacked her in 2009.

“I felt protective…as angry as I was…I just felt like he made that mistake because he needed help and who’s going to help him?”-Rihanna’s initial reaction to feeling bad for Chris.

“Absolutely. I think he was the love of my life. He was the first love. I see that he loved me the same way. We were very young and very spontaneous. We ran free; we ran wild. We were falling in love and going at a really rapid pace that we forgot about ourselves”-Rihanna reveals that Chris Brown was a true love of her life.

“I truly love him so the main thing for me is that he is at peace. I’m not at peace if he’s a little unhappy or he’s still lonely…I care”-Rihanna on her now feelings for Chris Brown.

Personally, I am so torn by these feelings Rihanna still has for this man who beat her.  I want her to hate him.  I want her to never speak to him again, but unltimately it isn’t my life.  And having worked in a domestic violence shelter for 2 years when I was just out of college, I’m not surprised.  She isn’t saying anything I haven’t heard before.

Everyone who comes out of an abusive relationship has a cycle of feelings and emotions to go through.  Rihanna has had the unique circumstance of having to live this trauma in front of all of us; in front of the world, really.  It can’t be easy for her.  In the interview, she also said that she had forgiven Chris.  The question of whether or not her fans can forgive him isn’t really one she can be concerned with right now.  She has to focus on her life and her direction. I hope that somewhere along the way, she finds the peace she wishes for him.

65 thoughts on “What’s the Buzz? Rihanna”