Ok, I think by now most folks have heard about Congressman (and Republican Senate nominee in Missouri) Todd Akin’s comments when asked about the legality of abortion in cases of rape.  If you haven’t, here’s the quote:

Well you know, people always want to try to make that as one of those things,  well how do you, how do you slice this particularly tough sort of ethical  question. First of all, from what I understand from doctors, that’s really rare.  If it’s a legitimate rape, the female body has ways to try to shut that whole  thing down.

But let’s assume that maybe that didn’t work or something. I think there should be some punishment, but the punishment ought to be on the rapist and not  attacking the child.

Now, if you are curious about the factually of Mr. Akin’s statement about the rareness of pregnancy resulting from rape, here are the results of a study from the Medical University of South Carolina:

We attempted to determine the national rape-related pregnancy rate and provide descriptive characteristics of pregnancies that result from rape.

A national probability sample of 4008 adult American women took part in a 3-year longitudinal survey that assessed the prevalence and incidence of rape and related physical and mental health outcomes.

The national rape-related pregnancy rate is 5.0% per rape among victims of reproductive age (aged 12 to 45); among adult women an estimated 32,101 pregnancies result from rape each year. Among 34 cases of rape-related pregnancy, the majority occurred among adolescents and resulted from assault by a known, often related perpetrator. Only 11.7% of these victims received immediate medical attention after the assault, and 47.1% received no medical attention related to the rape. A total 32.4% of these victims did not discover they were pregnant until they had already entered the second trimester; 32.2% opted to keep the infant whereas 50% underwent abortion and 5.9% placed the infant for adoption; an additional 11.8% had spontaneous abortion.

Rape-related pregnancy occurs with significant frequency. It is a cause of many unwanted pregnancies and is closely linked with family and domestic violence. As we address the epidemic of unintended pregnancies in the United States, greater attention and effort should be aimed at preventing and identifying unwanted pregnancies that result from sexual victimization.

Now, putting aside all feelings related to abortion, I just want to ask one thing.  Can we please, please, PLEASE stop putting modifiers on the word rape?  There is no such thing as “forcible rape” or “legitimate rape” or my personal favorite “rape rape” (thanks, Whoopi!).  Yes, I understand that we use terms like “date rape” and “statutory rape” to clarify the circumstances of an assault, but the bottom line is that a rape is a rape is a rape.  Can we stop making judgement calls related to the “legitimacy” of a rape?  Please? 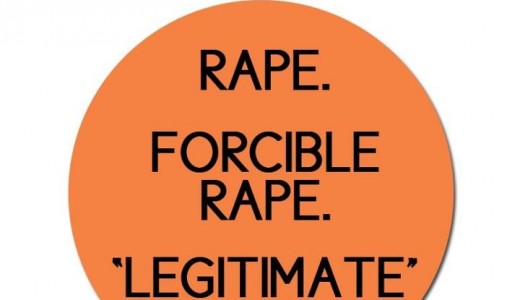