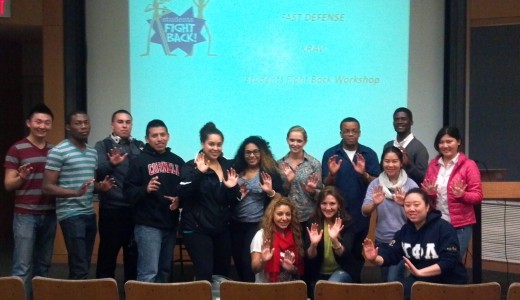 On Tuesday night this week I had the honor to throw down with some stellar students at Cornell University for the BYOB12 Tour. Given their Ivy League status, I think genius smart (or “Andy” from The Office) typically comes to mind when you think of Cornell.

However, I got to see these smarty pants kick some ass. And to hear them tell it, it’s about time.

Given several recent assaults at Cornell, leaders in the Greek community are working to empower and educate students. But these Cornellians want to do more than just talk the talk, as both men and women were ready to put the books aside for a serious lesson in Bad-Ass Ballet.

By the end of night, I was humbled to see several students, especially the gals, walking out with comments of feeling safer, stronger and more empowerd.

So I have to thank you, Cornell students, for inviting Students Fight Back to take part in your campus awareness. But more importantly, thank you for having the guts to address these serious campus issues that are often easily swept under the rug at such prestigious schools. Those of you taking the stand to be your own best protectors are the true brainiacs on campus. With brawns, of course.