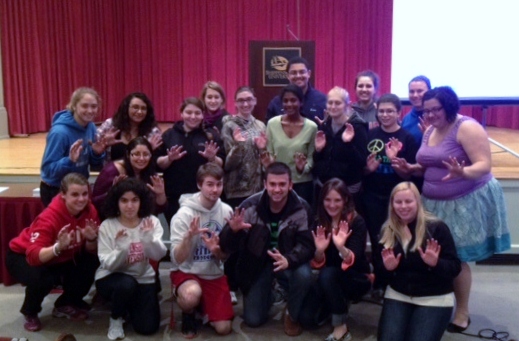 Girls Fight Back kicked off our 2013 Spring BYOB -Bring Your Own Badass – Tour last night at Shippensburg University. And oh, did they bring it!

As we got down to business, I quickly learned that the guys and gals at Shippensburg have their own little twist on the saying “ShiP happens… ” So what are you going to do about it?

And their answer to the question is a resounding “FIGHT BACK!”.

With a recent spike in assault and violence reporting, as well as nation wide media attention concerning emergency contraceptive, this small but mighty student body refuses to let ShiP just happen to them. Their feisty spirit is admirable and ready to make a difference, a change for the good.

Sometimes you have to just roll with it, and I’m all about that. But some circumstances demand that you fight back. And Shippensburg is certainly leading the way in the good fight!

Hats off to you, fearless friends at Shippensburg, and thanks for bringin’ it.

How to Handle Disturbing News

On December 15, I proclaimed to the interwebs that I was going offline until the New Year. I was very much looking forward to some down time, baking cookies, wearing ugly sweaters and drinking too much egg nog.

Within minutes of logging out of my social media accounts, I heard news on the radio about the shootings in Connecticut. This was just a few weeks after the massacre of a nanny taking the lives of two innocent children in Manhattan, and we all wondered how the hell this happened. Many politicians and public figures released statements in response to the Newtown killings, many of them starting with, “As a parent, I am horrified…”

Really, you don’t need children of your own to feel the horror of 6 and 7 year olds and their educators being murdered with an assault rifle in their classrooms. You just need to be human, with even a flicker of empathy in your heart.

Later in my tech hiatus, I heard about the gang rape in India of a young woman who ended up dying as a result of the attack. She was a medical student named Jyoti Singh Pandey. The incident evoked a national outcry for women’s safety in India and a need for self-defense training. (we are talking with a few orgs in India to make this happen…) Then we heard about acquaintance rape horrors straight from the mouths of Steubenville High athletes in Ohio.

While they seemingly knew their victim, I believe it was the worst kind of predatory attack, because she probably trusted them. Not the weirdo pouncing from the bushes in the tattered hooded sweatshirt who you are CERTAIN is there to harm you, their attack is equally – if not more so – sinister.

I watched the news each day of my “break”. And I was thinking: REALLY? Now? EVER? Why? Why. Seriously. This is so F*CKED up.

But I was committed to staying offline for the holidays, despite it being torturous to NOT respond to these violent things happening in the world in a timely fashion. I couldn’t DO anything. Which left me no other option than to simply…

I got quiet a lot. I prayed. I sent light. I held space. I fought the urge to over-saturate myself with heartbreaking details of the tragedies. Then I went about my day. I snuggled my babies. I lived my life. And I showed my support where I could.

Does this seem insensitive? Perhaps. But I propose we all do it more often.

This being vs doing…it was such a foreign concept to me – but also a lesson, a gift. Knowing that major events will happen, some very sad, but your engagement in the mass pain response isn’t necessarily helping anyone. So many years, I spoke to audiences with lines of 50+ people afterwards waiting to tell me their stories. Their horrific, unjust, terrifying stories – I heard them all.

If you are one of those voices, please know I still hear you now.

But let’s be clear about what is possible in the aftermath. Yes, we can educate ourselves and others. Yes, we can rally for political support of our stance on an issue. Yes, we can engage in protests and demand change. Yes, we can take our offenders to court. Yes, we can do our part…and FIGHT BACK – but bad shit will continue to happen.

This is not pessimistic – this is real.

And this reality will not bring these beautiful souls back – however they were lost to us (emotionally or physically). I wonder if we should question our efforts, and doubt our ability to make right something that has gone so horrifically, painfully awry. Because can we really fix this? Fix friends who rape friends? Gang rapes on buses? Murdering school children while they learn their ABC’s?

I believe in prediction and prevention. But I also believe in inspiration and transformation.

Because that’s when we need it most.

This is a guest post from a GFB friend – Katy Mattingly. She is a Personal Safety Educator and self-defense instructor at the University of Michigan, and the author of Self-Defense: Steps to Survival.

This year a number of my friends made New Year’s resolutions to “only say yes to those activities I really want to do” or “to only take on the number of projects I can handle without driving myself nuts”.  Most students I know are in the same boat.  And most women.  Heck, most people I know are planning to conquer about 1,000 projects this year, which is a plan guaranteed to leave us feeling like frantic failures.

Another way to frame this resolution is – Practice Saying NO.  If I try to get an A on every assignment, take on every community service project I’m asked to do, or attend every event I’m invited to – I would collapse.  We simply can’t manage our workloads or our lives without saying no.

And it’s not the easiest skill to learn.  If you find it challenging to refuse anyone anything, here are a few ideas to get you started:

1. Start small.  Make a list of 5 people or events you’d like to turn down, and rank them from easiest to hardest.  Start with the easiest one first – you might really enjoy saying no to it!

2. Practice.  Just like riding a bike, we’re likely to feel a little wobbly the first time we say no to joining that cool new Advisory Board or hosting the huge campus-wide 80’s dance party.  If you’re worried about how the conversation will go, ask a friend to role-play it with you a few times before you head out into the world with your big ole “No thank you.”

3. Try a three-part statement.  A simple tool for assertive communication recommended by many Personal Safety Educators: 1) Describe the unwanted behavior, 2) Describe the effect on you, and then 3) Describe the behavior you want in the future:

a) You borrowed my car again last night without letting me know.

b) I felt disrespected and I needed it to get to class.

c) I want you to ask my permission in the future.

And if it still feels hard to say no, know that you are in good company.  Explore why it’s difficult for many of us to say no, and get some great practical tips for how to do it from Lauren Taylor of Defend Yourself.

Remember, as Lauren writes: “You completely and utterly deserve to have your boundaries be known and be respected by others.”

Well, here we go again…another new year, another fresh start, another resolution.  For as long as I can remember, my resolution was always to lose weight. Year after year, I would “change my life”, go on some fad diet or extreme measure to make that year “my year”. It was miserable. I didn’t look forward to it and I never reached the kind of Victoria’s Secret success I had hoped for. My goals were unreasonable and unattainable. The year would pass and no matter any success, I would be disappointed with myself for not becoming the perfect person the new year had envisioned. And IT. WAS. EXHAUSTING.

This year. I’m done. Not because I think I’m perfect and not because I couldn’t lose a pound or two, but because I’m better than that. Let’s be clear- I have no interest in being obese or unhealthy. I have every intention of spending more time running in the morning, cooking well-rounded meals for me and my family and maybe doing a little yoga every now and then. I’m also going to eat out with friends, make brownies and eat more than I should and buy gummy bears in bulk.

It took a long time to get to this place and, in fairness I understand that there are people who for many reasons really do have to make drastic changes. For everyone else, I hope your resolutions this year are for you and you alone. Not for the guy or girl you’re trying to impress or the person you wished you looked like or anyone in any magazine ever! Those are not real people.

I’m not a hippie dippy, love yourself kinda person. But seriously, this year, give yourself a break.

P.S. If you ever need more of a pep talk on this topic. This might be my favorite thing ever.