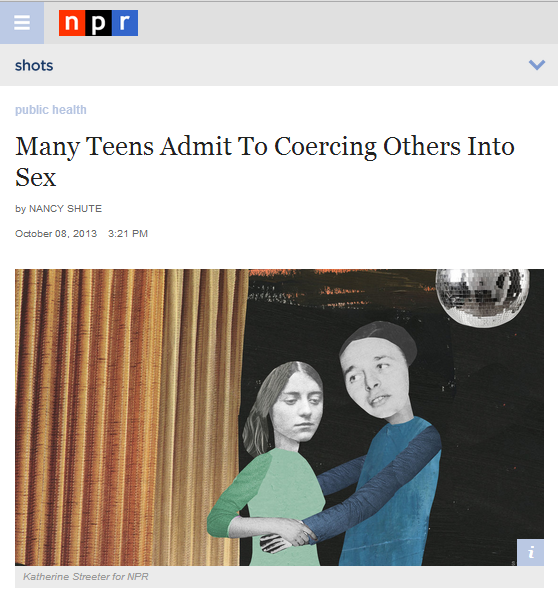 Almost 1 in 10 high school and college-aged people have forced someone into sexual activity against his or her will, a study finds. The majority of those who have done it think that the victim is at least partly to blame.

The results come from a multiyear study funded by the Centers for Disease Control and Prevention that was designed to look for the roots of adult sexual violence. Most adult perpetrators say they first preyed on another while still in their teens.

In adulthood, more than 1 million people are the victims of rape or sexual assault each year, according to the National Institutes of Justice. Domestic violence affects more than 2 million adults a year.

A multiple-choice online survey conducted in 2010 and 2011 asked 1,058 teenagers and young adults, ages 14 to 21, whether they’d ever “kissed, touched, or done anything sexual with another person when that person did not want you to?”

Nine percent said yes. Eight percent had kissed or touched someone when they knew the other person did not want to. Three percent got someone to give in to unwilling sex. Three percent attempted to rape the person, and 2 percent completed a rape. (The numbers don’t add up because some perpetrators admitted to more than one behavior.)

This may be the first survey to ask questions like these, and the researchers caution that because of the relatively small number of youths involved, the results aren’t definitive. But they are certainly chilling.

“I don’t get creeped out very often,” says Michele Ybarra, lead researcher of the study, which was published online in JAMA Pediatrics. “But this was wow.”

Sixteen seems to be the age when sexual coercion becomes a real possibility, at least for boys. Almost half of the study participants said they first forced someone to have sexual activity when they were 16. But by age 18, girls had become much more involved in preying on others, to the point where they were almost as likely to be perpetrators as were boys.

Three-quarters of the victims were in a romantic relationship with the perpetrator.

The coercion used was almost always psychological, not physical. The most common tactics for forcing or trying to force sex were guilt, deliberately getting the victim drunk or arguing with or pressuring the victim. Five percent threatened to use physical force, and 8 percent did. The survey used the federal Bureau of Justice definition of rape, which includes psychological coercion as well as physical force.

The survey also looked at media use and found that perpetrators of sexual violence were more likely to watch violent X-rated materials than were the others.

By now most parents reading this are probably ready to hide. But Ybarra tells Shots these numbers show that parents need to act and well before their children are 16.

“We absolutely need to have conversations with our kids about what healthy sex is and what unhealthy sex is,” she says. Parents could say, “‘If you have to convince your partner, maybe that’s not the right way to have sex.’ Even simple messages like that are important.”

26 thoughts on “NPR Article: Many Teens Admit to Coercing Others Into Sex”