Yesterday, this report was prepared by the White House Council on Women and Girls and the Office of the Vice President.  The report contains this quote. “College students are particularly vulnerable: 1 in 5 women has been sexually assaulted while in college. . . .”  President Obama signed a memorandum yesterday to create the White House Task Force to Protect Students from Sexual Assault.  I encourage you to read the words from his press conference and the report itself.

I think that conviction and that passion brings us all here today — because this is not an abstract problem that goes on in other families or other communities.  Even now, it’s not always talked about enough.  It can still go on in the shadows.  But it affects every one of us.  It’s about all of us — our moms, our wives, our sisters, our daughters, our sons.  Sexual assault is an affront to our basic decency and humanity.  And for survivors, the awful pain can take years, even decades to heal.  Sometimes it lasts a lifetime.  And wherever it occurs — whether it’s in our neighborhoods or on our college campuses, our military bases or our tribal lands — it has to matter to all of us.

Because when a young girl or a young boy starts to question their self-worth after being assaulted, and maybe starts withdrawing, we’re all deprived of their full potential.  When a young woman drops out of school after being attacked, that’s not just a loss for her, that’s a loss for our country.  We’ve all got a stake in that young woman’s success.

When a mother struggles to hold down a job after a traumatic assault, or is assaulted in order to keep a job, that matters to all of us because strong families are a foundation of a strong country.  And if that woman doesn’t feel like she has recourse when she’s subject to abuse, and we’re not there supporting her, shame on us.  When a member of our military is assaulted by the very people he or she trusted and serves with, or when they leave the military, voluntarily or involuntarily, because they were raped, that’s a profound injustice that no one who volunteers to defend America should ever have to endure.

So sexual violence is more than just a crime against individuals.  It threatens our families, it threatens our communities; ultimately, it threatens the entire country.  It tears apart the fabric of our communities.  And that’s why we’re here today — because we have the power to do something about it as a government, as a nation.  We have the capacity to stop sexual assault, support those who have survived it, and bring perpetrators to justice.

And that’s why, last year, I was proud to sign the reauthorization of the Violence Against Women Act, which improved the support we gave to cities and states to help end sexual assault.  And that includes funding to train police officers and nurses, and to speed up the processing of untested rape kits so we can reduce that backlog, solve unsolved cases, get justice for victims.

We pushed for the Violence Against Women Act to include more protections for immigrants; for lesbian, gay, bisexual and transgender Americans; for Native Americans.  Because no matter who you are or where you live, everybody in this country deserves security and justice and dignity.  And we have to keep reaching out to people who are still suffering in the shadows.

As Commander-in-Chief, I’ve made it clear to our military leadership that we need to deal aggressively with the problem of sexual assault in our armed forces.  It has been going on too long, and we have an obligation to protect the men and women who put their lives on the line to protect us.  And Secretary Hagel and Chairman Dempsey have already taken steps to reduce violence and support those who have been harmed.  But I’ve made it clear I expect significant progress in the year ahead.  These crimes have no place in the greatest military on Earth.

I’ve directed agencies across the federal government to do more to help members of their workforce who have been assaulted — because employers have a role to play too, and I want my administration to lead by example.  That’s why we’re releasing a new report today that outlines all of our efforts and where we intend to do more.  And I met earlier today with Secretaries Sebelius, Hagel, Duncan, Attorney General Holder, as well as Vice President Biden, as well as members of my senior staff to discuss how we implement going forward.  Because I want to make sure we’re doing everything we can to spare another American the trauma of sexual assault.

Today, we’re taking another important step with a focus on our college campuses.  It is estimated that 1 in 5 women on college campuses has been sexually assaulted during their time there — 1 in 5.  These young women worked so hard just to get into college, often their parents are doing everything they can to help them pay for it.  So when they finally make it there only to be assaulted, that is not just a nightmare for them and their families, it’s an affront to everything they’ve worked so hard to achieve.  It’s totally unacceptable.

Three years ago, we sent every school district, college, and university that receives federal funding new instructions clarifying their legal obligations to prevent and respond to sexual assault.  And we have seen progress, including an inspiring wave of student-led activism, and a growing number of students who found the courage to come forward and report attacks.  That’s exactly what we want them to do.  And we owe all these brave young people an extraordinary debt of gratitude.

But we cannot stop there.  There’s obviously more that we have to do to keep our students safe.  And that’s why here today, I will sign a presidential memorandum creating the White House Task Force to Protect Students from Sexual Assault.  And we’re going to work with colleges and universities and educational institutions of all kinds across America to help them come up with better ways to prevent and respond to sexual assault on their campuses.  And then we’ll help them put those ideas into practice, because our schools need to be places where our young people feel secure and confident as they prepare to go as far as their God-given talents can carry them. 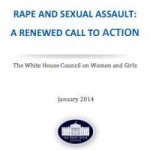