“We All Need to Hear This” at Northeastern Junior College 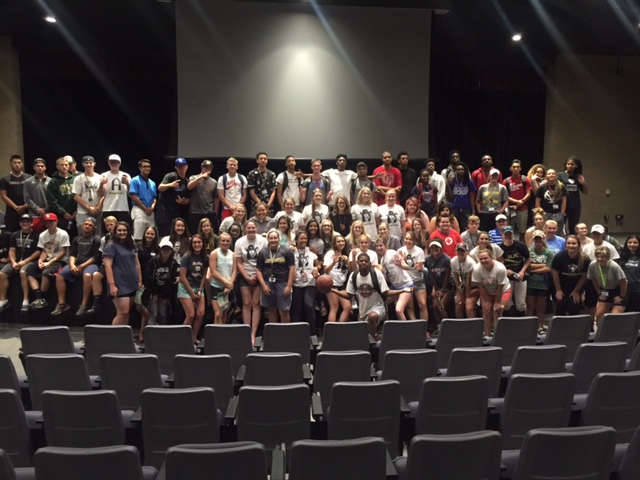 You know you’re doing something right with your message when you kick off your 2016 Fall Tour with feedback like: “We all need to hear this.” “I was pleasantly surprised to see how positive this presentation was… I’ve seen a lot of negative things like this, but this was so different. Thank you.” Um, heck yeah Northeastern Junior College. Thank YOU for keeping it real (and fun!) for your Welcome Back Week and letting Students Fight Back! be a part of your positive vibe. Special shout out to the student athletes for making an extra effort to be there and to NJC Student Government for hosting the stellar event. You are all badasses and can’t wait to see you again on the road. Till next time…

I was super excited to speak at the South Dakota School of Mines and Technology for many reasons. The first being, it is NOT snowing there. I repeat. It is lovely and sunny in South Dakota right now. Second- the school is only like 45 minutes from Mt. Rushmore – awesome side trip and I would have plenty of time. Third- SDSMT is an engineering school and the population overwhelmingly male. The school is really working to bring great programs to the women on campus and I was so glad to have GFB be part of that. And finally…it was a super easy, quick trip that was going to have me away from home for all of 24 hours. Trust me, this is rare.

I arrived at Seattle airport at 5am on Tuesday ready to go! Got to Denver on time and patiently waited to board my flight to Rapid City, SD. And then…it happened. The worst fear of business travelers, parents with tired children and people who just want to sleep in their own bed…”Ladies and Gentlemen, your flight has been cancelled.”

“Cancelled!!!? There’s no snow- what do you MEAN?!!!” came out of my mouth. Luckily the locals next to me explained the notorious fog situation in Rapid City and I was assured that they were quite serious (and rightly so) about the cancellation decision.  And so my journey began.

I booked it to the Frontier Airline counter but was beaten out my at least a dozen people, only to find that an earlier flight had also been cancelled and those people had beaten all of us to the next flight. So, I got on my phone and started making some calls. United had a flight leaving in a couple of hours- still plenty of time for me to make it to Rapid City for the program.  I was greeted by a ridiculous line when I got to the United counter so I whipped out my laptop and attempted to book a seat on the flight before the throngs of people in front of me (hey, all is fair in love and war) but no luck.

I started to realize there was no way I was going to get to SD by plane anytime before 9:00pm and was assured this was the case by the United rep. I went back to Frontier to check my options- very dismal.  Ok…Think. Think. Think.

After a quick call to Erin at “GFB Headquarters” and Mike at SDSMT I made my decision…time for a road trip!

Twenty five  minutes later I was on my way, driving down the highway in my fancy car.

Don’t judge me- I needed navigation and that was the only option! The school had agreed to push back the program one hour. I didn’t love having to do that- but I was 2 states and 6.5 hours away.  I finally started to relax about an hour in, knowing I was just going to have to do my best to get there. My Escalade also came equipped with XM satellite- which turned out to be a crucial part of this trip’s success. I drove through Colorado, Nebraska and into South Dakota. It was truly just me and the open road- a  few cars here and there,  a small town every once in while

but mainly just nothing but open sky and road.  I went over the program, had a few dance parties with myself, got inspired by this song ( changing the lyrics to “don’t need to fight” of course) and cleared my head.

I got to the school with 0 minutes to spare and was greeted by a room of awesome girls who had patiently waited for me. I liked them right away and even though I didn’t have my usual set up or start up routine- it turned out to be a great program.  I kind of love when there isn’t a fully packed ballroom of hundreds and I can talk to the students more one on one like they’re my sister or my friend – so that’s what we did for the next 90 minutes. AND to top it off..the ladies gave me a pink “miners” headband. Kinda like this one (only cooler)!

I got back to my hotel room and worked on a plan for getting home. I was quoted close to $700 to return Tom (my Escalade- we bonded) to the local airport and fly from there so instead I decided to take the drive back to Denver and take a later flight out of there the next day.

Something about the beautiful drive, the random situation and time to myself made this seem not as crazy as it sounds and taught me the very valuable lesson that sometimes we’re faced with less than perfect challenges that might just end up being exactly what we need.