ABC’s of Safety – “The Safety Godmothers”

One of the basics that all children learn when they go to school is the ABC’s. What they don’t usually learn, but all really need, is the ABC’s of safety. Ellen Snortland and Lisa Gaeta have stepped in to fill the void with their essential new book, “The Safety Godmothers: The ABC’s of Awareness, Boundaries, and Confidence for Teens.” Through the riveting true stories of 26 interviewees, they spell out the basics of what we all need to know to be safe and live with confidence. Topics covered include boundary setting, dating violence/domestic violence, rape and sexual assault, muggings, fear, verbal strategies to escape a bad situation, violence against the LGBT community, de-escalation, how to say no (the right way), and how to physically defend yourself if there is no other option. The book also includes three sections by the nation’s best known expert on the prediction and management of violence, Gavin de Becker and a thorough appendix with access to more in depth looks at some of the topics covered. This should be a must read for all teens. Girls Fight Back approved! 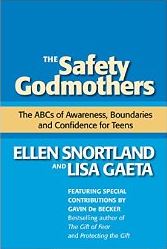 Yesterday I watched the video apology of Chris Brown, for assaulting Rhianna this past February.  I’m all for forgiveness and allowing people to make mistakes without raking them over the coals for the rest of eternity, but this video struck me as incredibly insincere.  Perhaps it was the script, or blaming things on his gaggle of attorneys or the perfect lighting for the video shoot.  All the parts fused together looked like one big performance.  But it got me thinking, is this something you can truly apologize for anyway?

Several years ago when I was still reeling from losing my friend Shannon McNamara to homicide, I found some solace in watching documentaries and real-life shows about murder. In many of these films, the killer was caught and brought to justice.  And in many of those instances, there was a tearful apology from the accused to the family for taking their loved one.  Sometimes the killer even recognized the almost insulting act of saying “I’m sorry” for taking the ultimate gift of LIFE.  In Shannon’s case, we never got an apology or an admittance of guilt, but I doubt it would have made much difference anyway.

Domestic violence and murder are not the same crime. However, according to the National Women Abuse Prevention Project, thirty-four percent of the women homicide victims over age 15 are killed by their husbands, ex-husbands or boyfriends. (So physical assault can lead to a lethally violent outcome.)  But yesterday as I watched Chris say he had been such a good guy up ’till the moment he beat his girl, I had to wonder if Rhianna and countless women who have been battered by their partners felt as insulted as I did.  Apologies are great when you’re late for a meeting or stain a borrowed sweater.  But when you try to throw your girlfriend out of a car?  When you smash her head into a window?    When you punch her in the eye?  When you repeatedly punch her in the face, WHILE driving a car?  When you utter the words “Now I’m really going to kill you” after all of this?  Oh, it keeps going…read the full police report by clicking here.

I’m sorry Chris Brown…but your apology just doesn’t cut it for me.  You need serious help.