Media Perceptions of Self-Protection: The Newsroom

I’m currently playing catch up on a several different TV shows, one of which is The Newsroom (the HBO/Aaron Sorkin show about a TV Newroom ala CNN/MSNBC).  A few of my friends are really into it and I’ve watched about four episodes so far.  I haven’t really been loving it as much, but I’m determined to stick with it a few more episodes before forming a final opinion. 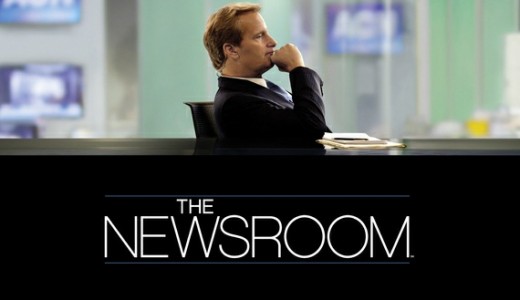 I recently caught Episode Four entitled “I’ll Try to Fix You”, which centers around the issue of gun control.  Now, I’m not a big fan of guns.  I’ve learned to shoot various types and I’ve learned how to defend myself against one just as all GFB speakers have, but one particular scene in this episode made me sit up and go “what?!?!”

Will (the lead character played by Jeff Daniels) is out on a date with Carrie (Kathryn Hahn).  They have made their way back to his place for a little post-date fun when she mentions that she has some pot in her purse.  She tells him to grab it out of the front pocket while she goes to slip into something more comfortable.  When he opens her purse, there is a little pearl-handled pistol staring up at him.

Will is now visibly disappointed and calls Carrie to him like a father disciplining a naughty child.  While chastising to her, he disarms the gun and tosses the bullets into her purse.  She grabs the now harmless weapon from him and says something along the lines of “you have your opinion, but if someone confronts me, I’m going to be able to protect myself”.  His response?  “That’s ridiculous because we know that in reality this is what would happen…” then he reaches up and knocks the gun out of her hand.  He catches it like an expert and points it back at her.

Now all that dialogue is paraphrased, but when I heard what he said to her, I actually said outloud, “No!  That is not statistically accurate!”

As we’ve been revamping the Girls Fight Back website and preparing to launch our Fall 2012 tour, Erin, Megan, Bree, the rest of the gang, and I have been discussing how difficult it can be to market the idea of self-protection or self-defense.  And part of that difficulty comes from the fact that a LOT of people simply don’t believe that it works.  They just don’t believe someone can successfully fight back against an attacker.   Particularly that a woman can fight back against a male attacker.

During these discussions, Erin helpfully pointed us towards the work of a man named Dr. Gary Kleck. Dr. Kleck has dedicated most of his career to investigating violent incidents, and measuring how victims’ reactions to the assault affect the end result.   Now you can read the entire 77-page study paper he released if you want, but here’s the CliffNotes version as Erin gave it to me before I was able to read the document myself:

-Research shows that self-protection (SP) is very effective in preventing the completion of a rape.

-SP efforts, both forceful and non-forceful, reduce the odds of an attack ending in rape.

-SP is effective, whether the offender is a boyfriend or a stranger.

-SP is effective, even if he is drunk or drugged.

-SP is effective, even against multiple attackers.

-SP is effective, even in attacks happening at home, or at night.

-Injuries, especially serious ones, are rare in situations where people are defending themselves.

-If you fight back, you are statistically NOT more likely to get hurt (as opposed to non-resistance).

-It’s quite the opposite…you are LESS LIKELY to get hurt if you fight back.

-Conclusion: Fighting back reduces the risk of the rape, and does not increase your risk of injury!

Now, you may be asking “what happens when you add guns into the mix?”  Well, the US Department of Justice released this little fun fact in 2002.

Now, I’m not trying to encourage you to run out and buy a gun.  I don’t own one and I don’t ever intend to.  All I’m trying to point out is that SELF-PROTECTION WORKS!  We have to stop buying into the myth that we as women can’t protect ourselves.  Yes, we have to be knowledgeable and that’s why GFB always recommends training whether that be standard self-defense training or weapons training, but we have power!  And choosing to use that power in violent situations DOES make a difference.

Keep tuning into the blog for success stories about women using their power (including a story of my own) and more insights from popular media (My Little Pony – what!?!?!).

You know, traveling the country as a GFB speaker really is a dream job.  I love seeing different parts of this great country we live in, meeting awesome new people and teaching men and women how to kick booty if necessary.  However, there is the less than glamorous side of our jet-setting ways.  From the colds picked up in crowded airports to the sometimes questionable items offered at the free hotel breakfast buffets, there are many times that us GFB speakers simply have to put on our “big girl panties” and deal with some less than ideal situations.  At this point, I should warn you that this post may be considered TMI (too much information) for some of you.  Proceed with caution.

For our first program of the 2011 Spring Tour, I took a leisurely 5 hour drive down to the adorable little town of Kennesaw, GA.  I left pretty early in the morning, so I drank lots of coffee and I was nursing a bit of a sore throat, so I was downing water like crazy.  I made a couple of stops; one for lunch and one to fill up the ole gas tank, but as I approached Kennesaw, my bladder was making it pretty clear that well, to put it bluntly, I needed to pee….like whoa!  (I told you this wasn’t glamorous, ok!?)

Now, I wasn’t far from my hotel and I was determined not to make another pitstop, so I pushed my way through and hoped for a speedy desk clerk to help me get checked in as fast as possible.  And when I arrived at the hotel, the desk clerk was wonderful; efficient and professional; everything I could have hoped for!  I grabbed my key and within minutes I was standing outside my assigned room.  Only problem was…my keys wouldn’t work.  I tried desperately to get it to open with one key, then the other, but after about forty tries with each key, I headed back downstairs.

Next problem, the desk clerk had been called out to help another guest and she was alone on duty, so I stood there at the desk waiting to be helped for what felt like 45 minutes and I’m sure was less than 2 minutes in reality.  When the desk clerk came back, she was again curteous and kind.  She rode up the elevator with me and tried to open the door herself.  No success.  She told me to relax there in the hall lobby and she would return with a new room key for me.  Which was great, except that my ability to relax was long gone as I stood there in the hotel hallway doing everything short of the international pee-pee dance to keep myself from well…losing it.

I was just starting to consider my options when there she came; my angel, my savior dressed in a blue blazer.  The wonderful staff member helping me arrived with a new room key and and an apology for the inconvenience.  I thanked her profusely, told her it was really no problem and then shut my door, threw down my luggage and raced to the facilities.  Ah, the glamour of the road!  Lol!

All my suffering was well worth it because Kennesaw State University students came out for our Students Fight Back program ready to have some fun.  The lectures chair at KSU, Jilly, put together an awesome event that featured lots of laughs, yummy pizza and some major butt kicking.

The first program of the tour always sets the pace for those to follow and if the KSU program is any indicator of what’s to come this spring, we are in for a wicked awesome tour!  I’ve got lots of programs within driving distance this semester, so you can trust that I’ll be making many more pitstops during my future drives!