And boy did they welcome us . . . with open arms and the best kind of sisterhood power! The Panhellenic team threw down with us last night as part of their Women Empowerment week (yes, an entire week dedicated to all the glow and glory that is women . . . how freaking cool, huh?). The ladies of Miami of Ohio are the epitome of everything that is good about the Midwest: down to earth spirit, vivacious energy, . . . and some serious ass-kicking sass. The RedHawks were in the moment and killed the Badass ballet engaging and challenging each other and myself with questions, cheers and roars. Yes, there was roaring. A special thanks to Ellie and her team for making me feel so at home and hosting a hella sick event. Much love to the newest sistas of Girls Fight Back! — GFB Bree 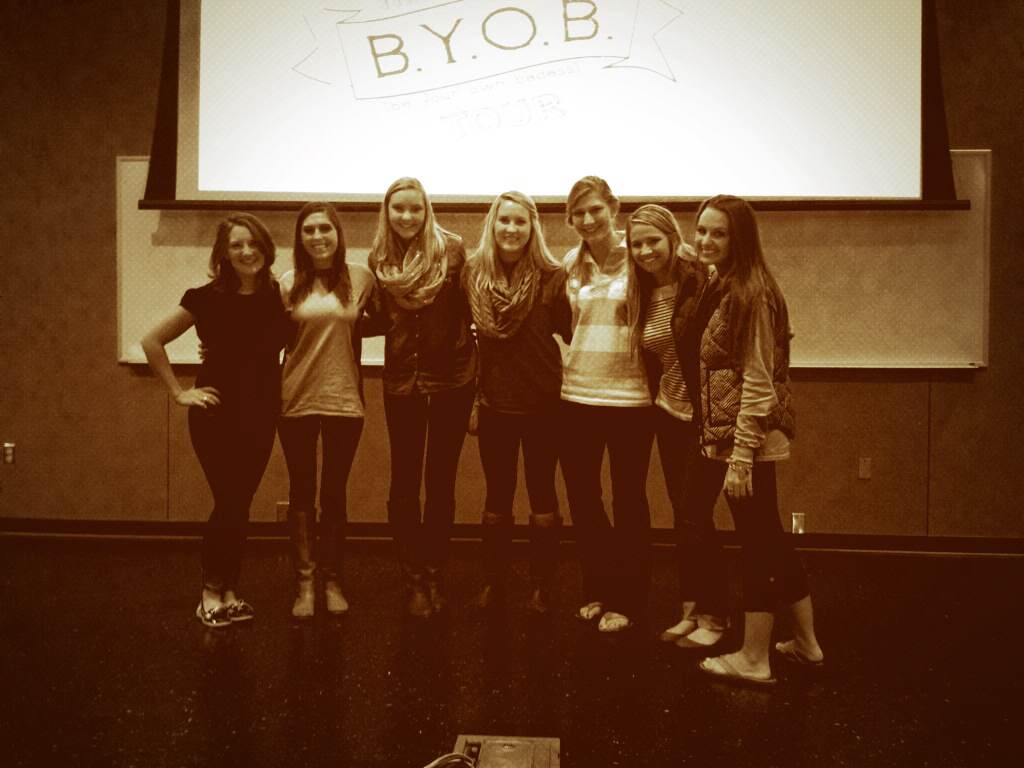 From Miami to Walsh.

Okay, I admit both places were in Ohio so it wasn’t quite the glorious road trip that the title implies.  Last week, I spent some quality time in Ohio and the first stop was Miami University and they were super cool . . . and creative.  For example, The Programming Board has an amazingly large banner that they named Abraham, which stands for “A Banner Reaching Awesome Heights and Miracles.” Once I heard that, I knew I was with good people and that we were going to have a good time.  I had a great time talking with everyone about personal safety and kickin’ booty when necessary.  A big thanks goes out to Devin, the event coordinator and Scary Bad Guy.  Devin is actually a repeat Scary Bad Guy and has mad skills in this area.

The next stop was Walsh University and, while they did not have a banner named Abraham, Bernie, one of the event coordinators, taught me a catchy song called “Stop,” which is a song about ending harassment and other inappropriate things.  The crowd was awesome, very interactive and entertaining.  I have to a throw out another big thank you to Steven, my very, VERY nervous Scary Bad Guy and Mike, one of the other awesome event coordinators.  And, Mike don’t think I forgot about the pony I demanded in return for this seminar.  I’ll keep an eye on my mail for it.  🙂

Overall, my trip to Ohio was a huge success and a lot of fun.  I had a great time with all of the awesome students at Walsh and Miami!

GFB Jaime with the awesome event coordinators at Walsh University!